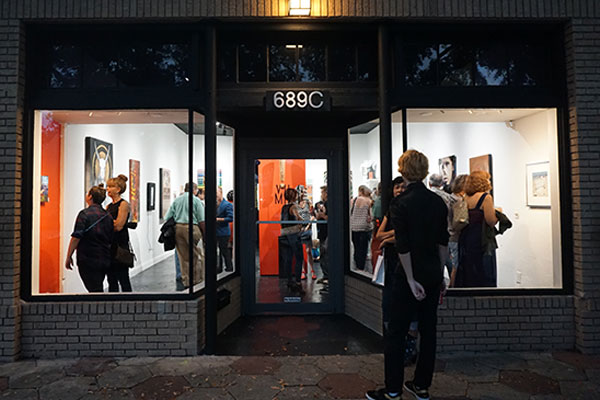 Sample images of the exhibit space at MIZE Gallery:

Fans and followers of St. Petersburg artist Chad Mize will be happy to learn he’s opening a new gallery.

Mize recently signed a five-year lease at a 900-square-foot space at 689 Dr. Martin Luther King Jr. St. N in St. Petersburg. The unit was formerly one half of the children’s boutique Growing Up and is in the Sir Walter building that houses Black Amethyst Tattoo Gallery and Banyan Cafe and Catering. The gallery will bear the moniker, MIZE.

It has been three years since Mize shuttered Blue Lucy, his former gallery on the 600 block of Central Avenue. He opened the gallery in 2010, and over five years represented more than 450 local and national artists through 30 group exhibitions. Blue Lucy is also where Mize debuted his wildly successful World Tour T-shirt. The tee that reads “Paris, London, Tokyo, St. Pete” has become a local icon.

Since then, Mize has kept busy as an independent curator, designer and muralist. His work includes upcoming murals for the Tampa Bay Rays and the Busch Gardens Food and Wine Festival. Multiple businesses around the city carry his shirts, including the Dalí Museum and the Vinoy.

But last fall, he felt it was time to get out of his comfort zone and take a chance on another gallery.

“When you have your own space you create your own aesthetic, your own vibe,” Mize said. “I’m excited to help the city and feature the artists that I like.”

The gallery could be open as soon as early April. Mize and Black Amethyst Gallery are presenting a second “100 Films” art show at Green Bench Brewery on April 7. Mize is hoping to be able to bring what doesn’t sell in the one-night show into the gallery.

Mize plans to open the gallery on weekends only, and then by appointment. He’ll use it as his office space to meet with clients. In addition to art shows, he also plans to screen films and host artist talks. The gallery will have a retail aspect, too, featuring Mize’s prints, stickers and a special edition of the World Tour shirt, specific to the gallery.

He’s enthusiastic about the neighborhood of Historic Uptown, where there are plans for more growth. The area is also close to the Fringe District, where many businesses that were previously on Central Avenue have relocated, including Star Booty and Planet Retro Records.

“I think this is going to be the new Central Avenue,” Mize said.